Existing site conditions and construction restrictions associated with working on an active airfield required extensive planning and coordination with the Metropolitan Washington Airports Authority (MWAA) personnel throughout the design process. AMT worked with MWAA staff in establishing the optimum route for the new water pipelines based on the identification of over 70 existing utility crossings, record drawing research, and completion and documentation of over 40 utility test holes. AMT also worked with MWAA staff in establishing the construction phasing for the project, which included the identification of the appropriate locations for staging of boring and jacking pits for trenchless pipe installation crossing active runways. Specific elements of the design included the preparation of plan and profile drawings for the proposed alignment, specification preparation, and detailing of all
required appurtenances (including valves, tees, hydrants, air-release valves, blocking, and restrained joint pipe, where necessary). Additional details, specific to this project included typical pipe casing and end seal details associated with the trenchless pipe installation and specific pipe joint design and layout associated with crossings of utilities carrying potentially hazardous materials, such as jet fuel. Type, class, and size of pipe were based on MWAA standards, and hydraulic analysis of the future demand of the airport based on anticipated expansion. The project was completed on time despite a significant delay in the schedule requested by MWAA, due to changing demands at the Airport. AMT responded quickly in remobilizing the design effort when asked by MWAA and supported the Airport in a significant redesign, which resulted in a pipe size reduction and a cost savings on the project. 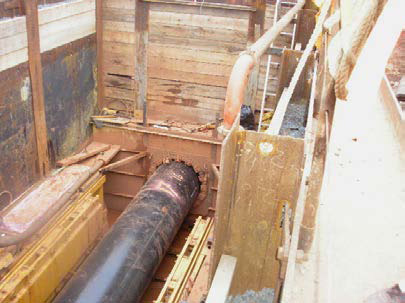