Flood Mitigation in the Roanoke CBD

The Roanoke Central Business District (CBD) is an economic hub, and its long-term sustainability and resiliency is vital to the region, however downtown Roanoke is also subject to flash flooding during intense rainfall since it sits atop the confluence of two major streams – Trout Run and Lick Run.  These streams convey runoff under city streets in large drainage tunnels dating back to the 1880’s, built prior to modern engineering standards.

This flood mitigation study evaluates historic flooding and compares traditional and emerging practices in flood mitigation to establish recommendations that will reduce or eliminate risks. Modeling after the Election Day Flood of 1985, recommendations are based on the 25-Year Storm Event using both a 1-hour “Flash Flood” and a more protracted 24-hour duration storm event.  Additionally, we will promote water quality improvement in the solutions, to foster a green approach and garner public support for a resilient future.

Currently, AMT is developing detailed PC-SWMM modeling including a 2-D mesh of existing flood depths, proposed conditions modeling of alternatives and recommended flood mitigation projects, conceptual improvement plans and cost estimates with a prioritization and ranking system to establish the best recommendations. AMT is participating in the Roanoke Preparation and other public outreach efforts and will present final recommendations to City Council at the conclusion of this study.

AMT is also reviewing record drawings and GIS databases for the existing stormwater infrastructure in the Central Business District (CBD).  Utility conflicts, structural deficiencies and retrofits, and other maintenance needs are addressed in the written report.  Also, a total of 84 drainage structures were surveyed to address identified gaps in the GIS database for pipe and structure sizes, rim elevations and invert elevations.  Supplemental survey data was geocoded to match the City node numbers and used to refine the EPA SWMM modeling of existing drainage conditions. 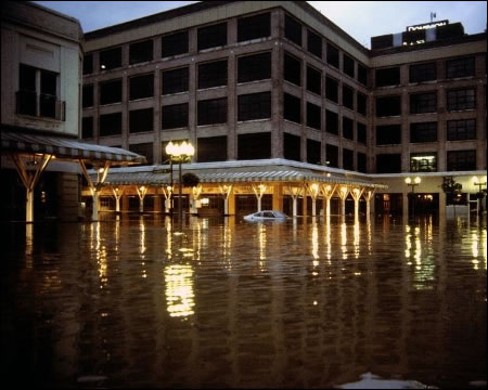